Minhaj-ul-Quran International (منہاج القرآن انٹرنیشنل) (or MQI) is broad-based international moderate Islamic non-governmental organization (NGO) founded by Dr Muhammad Tahir-ul-Qadri on 17 October 1980 in Lahore, Pakistan. It has a long-term strategic vision to promote religious moderation, effective and sound education, inter-faith dialogue and harmony, and a moderate (and anti-extremist) interpretation of Islamic sciences. It has expanded to 90 countries around the globe.[1] Its emphasis is improving the social, cultural and religious condition of all people, enlightening the masses with the knowledge of their rights and duties and presenting a realistic, rational and scientific picture of Islam's gentle, tolerant and just nature. It explicitly rejects terrorism and all other unjust violence as being entirely un-Islamic.

The headquarters of Minhaj-ul-Quran International was inaugurated in 1987 by Hazoor Qudwatul Awliya Shaykh-ul-Mashaikh Pir Syedna Tahir Allauddin Al-Qadri Al-Gillani Al-Baghdadi who is regarded as the organizations spiritual founder. The objective of Minhaj-ul-Quran in the Europe and the west in general is to create harmony in society between different cultural, ethnic and religious communities through social interaction, interfaith dialogue and spreading the messages of toleration, respect for others and the benefits of integration. It also actively promotes human rights and women's rights around the globe. [2]

Minhaj-ul-Quran works closely with the Christian community, as well with as other ethnic and cultural minority communities in Pakistan, for the purpose of highlighting and promoting their citizen rights. It is the first organisation of its kind that has initiated interfaith dialogues with religious minorities.[3] Dr. Qadri is the Chairman of the Muslim Christian Dialogue Forum, where Christian bishops and Muslim clerics and scholars work side by side.[4] 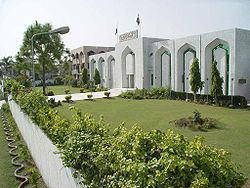 Minhaj-ul-Quran International has expanded to over 80 countries. It has its educational and community centres in Asia, the Middle East, Europe, North America, Australia and Africa. Its main offices are in London, Paris, Frankfurt, Milan, Barcelona, Oslo, Copenhagen, Amsterdam, Dublin, New York, Toronto, Sydney, Hong Kong and Tokyo. It established the Directorate of Foreign Affairs at its HQ to co-ordinate and to expand its network abroad.[5]

Minhaj-ul-Quran UK is the UK branch of the Minhaj-ul-Quran International organisation based in London. MQI started its education, welfare and human rights work in the United Kingdom in 1986 and held its first international conference at Wembley Arena, London. Since then, Minhaj-ul-Quran UK has opened ten community centres serving all parts of the country. It claims to have tens of thousands of affiliates more than 5000 regular members.[6] Its emphases on welfare, education, inter-faith dialogue, moderate Islam, integration-focused policies, and anti-extremism match those of its parent organisation.

The UK organisation launched Dr Muhammad Tahir-ul-Qadri's Fatwa on Terrorism in a March 2010 event in London in which various government officials participated. [7] The Times Online claims that Minhaj-ul-Quran UK advises the British government on how to combat Political radicalism|radicalism.[8]

Minhaj-ul-Quran Norway is the Norwegian branch of the Minhaj-ul-Quran International organisation based in Oslo. MQI established its centre in Norway and Denmark early in 1984. MQI has various community related projects which are supported by the Norwegian Government. [9]

One of the main projects is the Minhaj conflict resolution or Minhaj Konfliktråd (MKR).[10]

Minhaj-ul-Quran Denmark held an international conference on Religion and Radicalism in which among others Mr Jakob Ilum (Director of The Danish Security and Intelligence Service, Prevention Center) was a guest speaker[11]

The ideology of Minahj-ul-Quran International is multidimensional and relates to the spiritual, moral, educational and social progress of human beings in the light of a modern and moderate interpretation of the Quran and the sunnah of the Prophets Muhammad (PBUH). It promotes religious moderation, peace and interfaith harmony. In the west it has specialised in tackling extremism and radicalism amongst young Muslims in the hope of reducing the evil of terrorism.[12]

Some organisations put all their efforts into research, others into spirituality, others into education, some into political aspects and vast majority of these organisations are usually limited to local areas. Dr. Muhammad Tahir-ul-Qadri says he felt the need to establish Minhaj-ul-Quran because, after analysing the work and efforts of all the contemporary Muslim organisations, he concluded that they all were working on very limited level, none of them had a comprehensive global vision and programme and they lacked co-ordination and co-operation. However, the message of the Prophet Muhammad was comprehensive and global and therefore the various outstanding characteristics of Minhaj-ul-Quran International are believed to lead to a revival of message of the Prophet Muhammad.[13] These characteristics include:

The educational network of Minhaj-ul-Quran is well-known in Pakistan. It runs around one thousand educational institutes, including libraries in Pakistan and a university based in Lahore which was chartered in 2005.[14]

It also runs a successful charity, the Minhaj Welfare Foundation (MWF), that has a global network and aims to provide emergency aid, health care, welfare support and education to the poor and those affected by natural disasters.[15] It is a UK registered Charitable organization under the Charity Commission.

Minhaj-ul-Quran has continuously aimed to promote the tolerant, inclusive, peaceful and balanced message of Islam through the modern and scientific interpretation of Islam, and has distributed over 300,000 books of Dr. Muhammad Tahir-ul-Qadri in the last 25 years. CNN has stated that Minhaj-ul-Quran "aims to promote religious moderation and a modern interpretation of the Quran." .[2] It also has produced and distributed millions of video cassettes, CDs and DVDs with lectures of its founder on almost every concept of Islam worldwide.[16]

Minhaj-ul-Quran holds one of the largest annual Itikaf gatherings during the month of Ramadan, after the Holy cities Makkah and Medina, with a record of 37,000 people sitting congregational Itikaf in 2007. It holds the largest Laylat ul Qadr night event on the 27th Ramadan with millions of attendees.[17]

Minhaj-ul-Quran also has revived the concept of celebrating the birth day of the Prophet Muhammad in the Ummah. The largest annual International Mawlid an-Nabi (Milad un Nabi) event takes place in the grounds of Minar-e-Pakistan, Lahore, on the 12th of Rabi' al-awwal and attracts millions of people from all over Pakistan and aboard. The highlight of the event is the special speech by Dr Muhammad Tahir-ul-Qadri followed by recitation of salutations upon the Prophet Muhammad. [18] In 2008, due to the limitation of the space at Minar-e-Pakistan, it plans to decentralise the event and will hold events in 5 different cities and broadcast the speech live to all the cities. It also holds the largest Mawlid-un-Nabi celebration feast (Ziafat-e-Milad), which hundreds of thousands people attend throughout the month of Rabi-ul-Awal, in which Dr. Muhammad Tahir-ul-Qadri himself serves the dinner.[19]

On 3 December 2005 Minhaj-ul-Quran established a full-time institution called Gosha-e-Durood where any individual can apply to sit for reciting salutations on the Prophet Muhammad. In the last two years trillions of salutations have been recited. A building dedicated to this purpose with Mawlana Rumi style minarets is under construction.[20]

It also airs the main lectures of its founder live on the private international TV channel QTV (ARY), which enables millions of people abroad to listen.[21]

In the past decade Minhaj-ul-Quran International has successfully established various Islamic resources to promote the peaceful and balanced message of Islam using the internet. It also successfully runs three Islamic magazines which are distributed to its members.Citation Needed

Minhaj-ul-Quran International is the first organisation of its kind that has initiated interfaith dialogues with religious minorities in Pakistan. Its founder is the Chairman of the 'Muslim Christian Dialogue Forum' to highlight and promote their citizen rights.Citation Needed

The United Nations Economic and Social Council (ECOSOC) has formally recognised and granted a 'Special Consultative Status' to Minhaj-ul-Quran International due to its services in promoting peace, tolerance, interfaith harmony and education, tackling extremism and terrorism, engaging with young Muslims for religious moderation, promoting women’s rights, and providing social welfare and promotion of human rights.[22]

Minhaj-ul-Quran in the international media